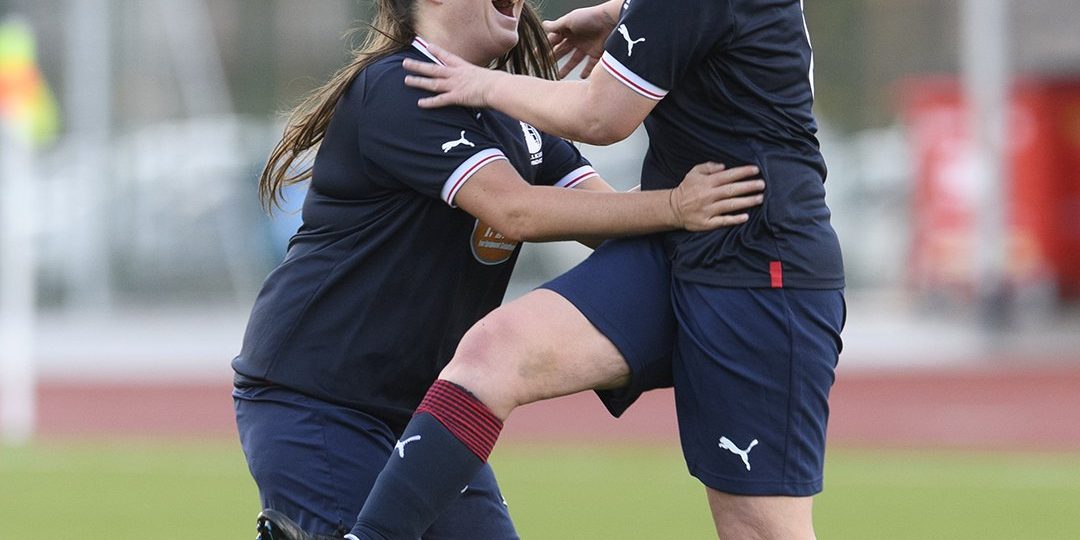 Having previously won 2-0 against a good Edinburgh Caledonia side earlier in the season, Falkirk found themselves on an away trip to Meadowbank looking for another win to continue their promotion charge this season.

Falkirk started the first five minutes of the game well with most of the action coming down the left wing through Avril Johnstone, who in turn posed as a massive threat all game for the Edinburgh defenders. She would go on to get the credit she deserved after a series of missed chances early in the game. The attacking four of Falkirk made their presence felt early, being involved in all the attacking play, but nothing would come of it yet.

As the 15-minute mark approached, Edinburgh Caledonia found themselves getting a foothold in the game running at the defensive line and creating various problems but nothing troubled Rachel Pirie in goals. That was until an Edinburgh attacker was fouled in the box during their spell of possession, giving the referee no choice but to award a penalty. Rachel Pirie, an experienced goalkeeper for her age, was beaten from the spot through sheer power, getting two hands to the ball but failing to keep it out of the net.

The penalty was the wakeup call Falkirk needed, going on to score three goals before half time. The first came from great attacking play as Wyatt, who has been heavily involved in attack this season, managed to hold off multiple defenders and slip the ball through the defensive line to an on rushing Carolanne Cullen who made no mistake in finding the net.

Waves of surging attacks challenged the Edinburgh defenders, one of whom put in a very rash, studs up challenge against midfielder Lauren Simmons. The midfielder became an established set-piece specialist last season but hasn’t had much of a look in this season. After a loud claim to take the free-kick she made no mistake in finding the top corner, putting Falkirk ahead.

Two minutes before half time Avril Johnstone found the back of the net for Falkirk’s third. Good build up play from Falkirk allowed themselves to play through midfield and out wide to Avril Johnstone on the left. Johnstone then decided to drive into the box towards the goal where she slotted the ball through the onrushing goalkeepers legs to get her well deserved goal.

The second half began with Edinburgh looking more dangerous in the first 10 minutes, forcing problems into the hands of the Falkirk defence. Amy Rafferty went into the referee’s book four minutes into the half after pulling an opposition shirt to stop an attacking run but much like the rest of the half for Edinburgh, nothing was to come of the resulting free kick.

Falkirk were very much the more threatening of the two sides for the remainder of the game with many chances falling to Kirsty Gilbert, Eva Rule and Carolanne Cullen but it took until the 73rd minute for anything to come of it. Kirsty Gilbert offered creativity following her introduction, being involved in a lot of the attacking play and contributing to the remaining chances of the match. A loose ball was played into the attacking line after disciplined pressing and Eva Rule took the ball in her stride, driving towards goal and finishing past the goalkeeper to extend Falkirk’s lead to three.

Kirsty Gilbert was rewarded for her hard work in the 90th minute when, again, a Falkirk press forced a lofted pass back from the Edinburgh midfielder to their goalkeeper who mis-kicked the ball. Kirsty Gilbert anticipated the kick well and was on hand to take it off the toes of the goalkeeper and pass the ball into the empty net to make it five for Falkirk.

Another 3 points for The Bairns keeps them in contention for promotion. Next up is Derby Day away to Stenhousemuir who, like Westdyke ladies, are level on points in a three-way tie for second place.