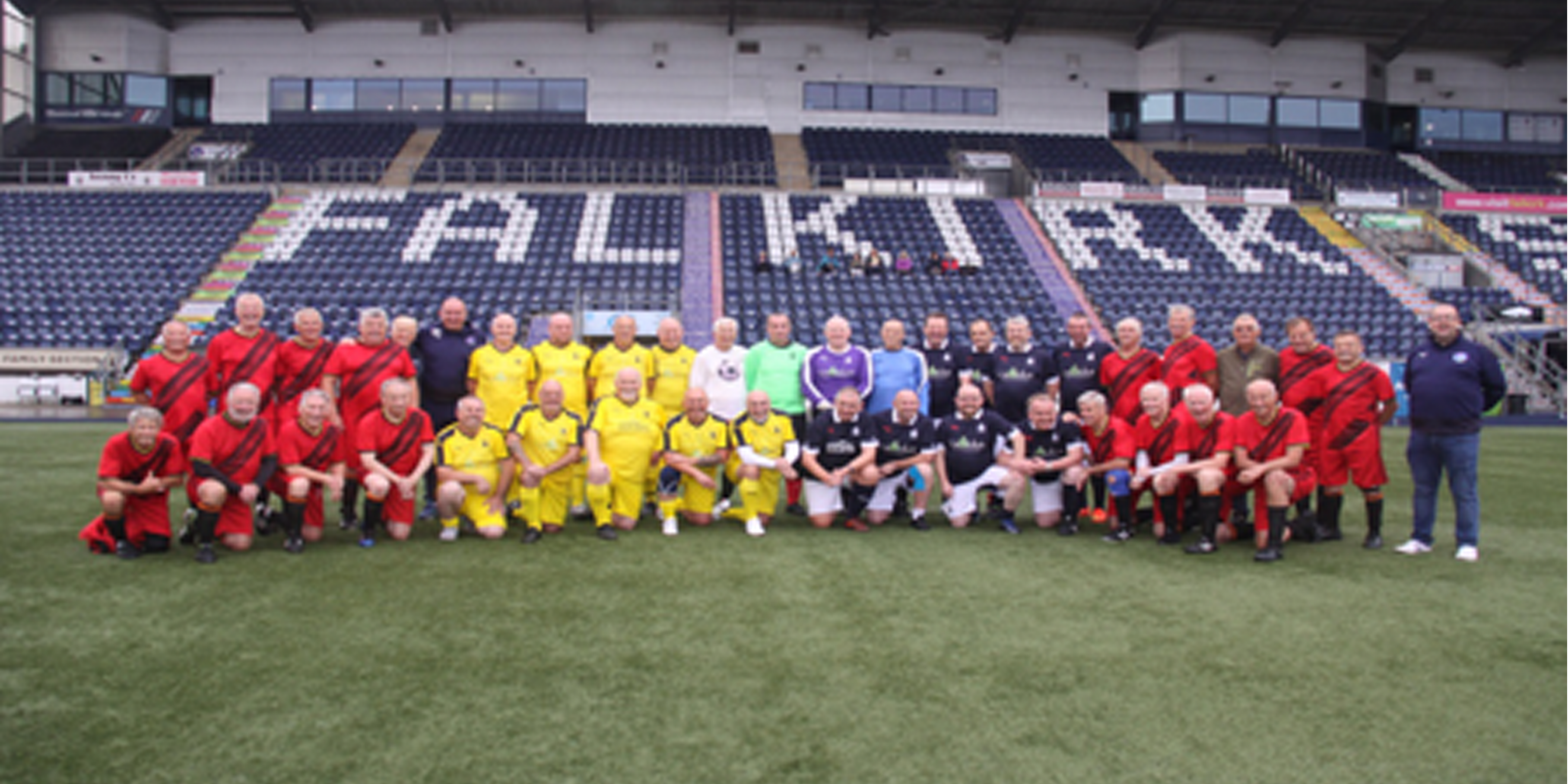 Monday the 22nd of August saw one of the Falkirk Foundation’s more successful programmes, Falkirk FFIT, take on an International team from Canada, The Vancouver Classics.

The culmination of 2 years planning, delayed by covid, saw over 40 men take part in two small sided games at the Falkirk stadium.

The Falkirk FFIT team was made up of graduates of the Foundation’s flagship programme (in conjunction with SPFL Trust), Football Fans In Training, whilst the Canadian team was made up of various members of their drop in league; a programme set up where men or women can turn up, play and be allocated a team.

Members of FFIT met with the Canadians early Monday morning and organised a trip to two of Falkirk’s biggest tourist attractions, the Falkirk Wheel and the Kelpies. Although the weather was driech, it did not dampen the enjoyment of the Canadians’ experience of these 2 landmarks.

After their trip to the Falkirk wheel, The Vancouver Classics had a very enjoyable lunch at the Westfield Café and lounge within the Falkirk Stadium, where they also received some gifts from Falkirk FFIT and a tour of the stadium. After a walk around the Kelpies it was back to the South Stand to meet other members of FFIT and prepare for the night time games.

Two games of eight-a-side took place and were played in a competitive but friendly manner, with both teams scoring goals. No need to mention the actual score, as the old saying goes, everyone was a winner.

The team from Vancouver are touring Britain playing various teams, even some English Premiership teams, and so far they are most impressed by the set up and hospitality they received at Falkirk. Falkirk FFIT would like to thank all of the staff at the Falkirk stadium, The Falkirk Foundation, The Falkirk wheel and The Kelpies for assisting in this reflection for visitors to our community, proving Falkirk is a great tourist destination and providing a positive image to our visitors from Canada. Many of the visitors said they would love to come back on vacation rather than a football trip in the summer!

Football Fans In Training (FFIT) is Europe’s leading healthy lifestyle programme and encourages both men and women to lose weight and become healthier and happier. Targeted at people aged 35-65, FFIT offers football fans the opportunity to train with Falkirk Foundation coaches for free and aims to increase participants’ knowledge of nutrition and healthy eating, improve their lifestyle choices, reduce their weight and waistline, and increase engagement in physical activity. The only requirement to join the programme is to be aged 35-65 and have a waistline of at least 38 inches.

Back in 2015 some of the graduates, including Dougie McCallum, the Godfather of FFIT, felt there was an opportunity to continue the great work beyond the programme and took it upon themselves to create what we now know as Falkirk FFIT. This was a chance for previous course graduates and others within the community to continue their journey to a happier, healthier lifestyle through the nation’s favourite pastime, football. For a large number of members, it allowed them to revisit their youth and experience playing semi-competitive football at a pace and ability level where everyone was treated equal regardless of your ability, size or weight.

Throughout the years Falkirk FFIT has continued to grow with over 120 members currently registered and 50-60 people regularly turning up on a Monday night to play football.

It is important to highlight that the nature of the Falkirk FFIT group has grown beyond the physical wellbeing of our members. Now, more than ever, men require an avenue to be open and talk freely about their mental health in a setting they feel comfortable with. Football, for us, provides that opportunity.  The social aspect of 10/15 minutes before and after a game should never be underestimated in the good that it can bring and allowing others to talk honestly and openly about their thoughts and feelings without prejudice or remorse.

In June 2022, we took the message of FFIT and it’s benefits to the Outer Hebrides on the Isle of Lewis where we arranged a match with a local team. It was a big event both for us and for the Lewis football team. Whilst we won’t talk about the final score, providing a group of our members the opportunity to go away for a few days for a game of football and spread the message to the Outer Hebrides has also inspired and encouraged them to create their own FFIT team and bring the benefits of it to their local community.